What Are Rooted Cuttings and Grafts? And What Role Do They Play in Wine Growing? 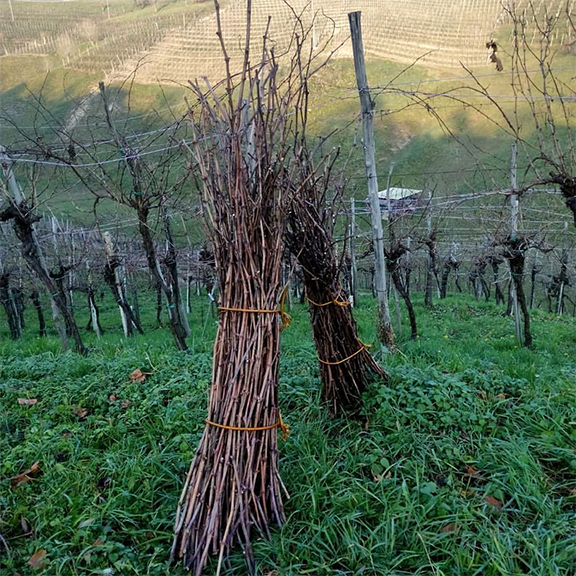 Here at the Boulder Wine Merchant, we often get questions (from our wine geek friends) about vine grafts and the “cuttings” used to perform them.

Utilizing these parts of the vine plays an extremely important role in grape farming, especially when it comes to the production of fine wines from historic vineyards.

If you’ve ever been curious about the process, or if you incorporate this practice in your own vineyard, we’re excited to share a little look behind the curtain of this unique growing tactic.

What is Vine Grafting?

Throughout viticultural history and the present day, grafting is used for a number of different reasons in vineyards.

A “graft” is performed by inserting a vine cane — a stalk that has produced fruit — from one vine into a slit in the branch of another vine. The sap from each plant will begin to intermingle and circulate throughout the vine and as they grow.

As this happens, they will ultimately share each other’s genetic material and profile.

Why Do Grape Growers Graft Their Vines?

One of the most famous examples of grafting in viticulture happened in the 19th century as phylloxera decimated the vineyards of Europe.

Phylloxera is a nearly microscopic plant louse that feeds on the sap in vine roots and leaves. The fungal infections caused by their dirty work ultimately strangle the vine as they cut off the plant’s circulation of water and sap.

By the mid-1800s, it looked like grape growing in Europe, and the continent’s historic wineries and wines would be lost forever.

To save European viticulture, grape growers used rootstock — vine stems — from a wild biotype of vine that grew in North America to graft cuttings from their historic vineyards. The American rootstock was resistant to phylloxera (thanks to its wild character) and so the grafted cuttings flourished.

This not only saved the Europeans’ vineyards but also ensured genetic continuity with the vines they had grown in the era before phylloxera. The Europeans (and most famously the French) did this by taking cuttings from sick but coveted plants and grafting them onto the American rootstock.

And that’s the key here: Cuttings can be used to “propagate” the genetic material from a historic vine or vineyard.

It’s incredible to think about how the great vineyards of Bordeaux and Burgundy were saved by rootstock that came from Texas.

No joke. Every time you drink your favorite French wine, there’s a little bit of Texas DNA in there!

What is Clonal Selection?

Another major role that cuttings play is in something that we call “clonal selection.”

Sometimes a vineyard manager will notice that plants in certain parts of his parcels are underperforming. In other words, the plants aren’t producing the desired number of clusters or the fruit isn’t as richly aromatic and flavorful as it is in other areas.

In order to improve the overall production of the parcel, they will take cuttings from the more productive plants and graft them onto less productive plants. The genetic material from each plant will ultimately combine.

When the process is carried out correctly, it can help to save a sick or dying plant, give a weak plant more vigor, or make an underperforming plant more productive.

What is Mass Selection?

Mass selection — or sélection massale in French — is a process whereby a vineyard manager tries to bolster the quality of their vineyards by selecting cuttings from their top vines.

And when we write “top vines,” we’re not just talking about the yield or the productivity of the vine. Mass selection is used to propagate historic vines that have produced some of the grape grower’s best wines.

The cuttings may be taken from extremely old vines (anywhere from 20 to 40 years old). Those “old vines” may not be very productive anymore. But they may also produce some of the best fruit in a given vineyard.

When Do You Use Cuttings To Replant Vineyards?

Another important role that cuttings play is in the replanting of vineyards or the planting of new vineyards.

Cuttings don’t necessarily have to be grafted on to another plant. They can also be planted directly into the ground.

To do this, the grape grower will take a productive cane from one plant during the vine’s dormant period in winter. They then plant that cutting directly into the ground where they want that vine to grow.

Grape growers do this in the early part of the year (when the vine is dormant or “sleeping”) so that the vegetative cycle of the vines will align: They will all “wake up” together at the same time, so to speak.

Vineyard managers usually do this when a part of their vineyard has become unproductive or unhealthy due to vine disease. Sometimes they do this because plants die or become totally unproductive.

It’s a process and a cycle that renews every year. If you drive around wine country in the early months of the year, you’ll see vineyard managers in their vineyards cutting canes from the better parts of the parcels and replanting them directly into the ground where vines have died or ceased to be productive.

It will take roughly three vintages (vegetative cycles) before those vines produce fruit that is suited for fine wine production. And the vineyard manager has to be careful to use only desirable cuttings.

Otherwise, he can propagate underperforming or otherwise undesirable vines inadvertently.

Another primary reason for grafting cuttings or planting new cuttings is to help protect the plants from vine disease and even climate change.

Using mass selection, a vineyard manager may decide to graft or replant cuttings from plants that have proven to be more disease-resistant.

Similarly, as growers face rising temperatures (regardless of the cause of climate change, all growers agree that the world is getting hotter), they will take cuttings from vines that have proved more resilient to extreme weather and propagate them throughout a given parcel.

Want to Learn More About Wine?

Whether you’re a seasoned pro or just starting out on your sommelier journey, we love giving you more resources to perfect your craft.

Are you a fan of decanting? Looking to revive an old wine?