Beyond Vinho Verde: A Deep Dive on Port Wine I recently was privileged to travel to Portugal for one week to visit wineries and vineyards. The main things I was asked about by friends and family as I was preparing to go were Vinho Verde and Port.

In actuality, I tried very little Port on my trip and no Vinho Verde. However, these questions illustrate very well how little most of us know about Portuguese viticulture, to their detriment, but also to ours.

The reasons we know so little about Portuguese wine are many, but it has to do a great deal with their history, and the history of Europe as a whole.

A Brief History of Portuguese Wine

The Portuguese kicked the Moors out in 1250 AD, about two centuries before their neighbors in Spain did, which meant a return to grape growing and wine drinking, as well as the beginnings of national identity. It also meant that with their backs to Spain, the only trading available for alcoholic beverages was over water. Indeed Portugal was one of the first European countries to develop a powerful navy.

Two major developments in the history of wine resulted from this. The first was the discovery off the coast of North Africa of the island of Madeira. The second thing was the establishment of a long-lasting and strong trade relationship with England, codified first in the 1386 Treaty of Windsor. Other treaties followed and made the relationship even more beneficial.

The reasons for the importance of strong trading friendship between England and Portugal are not immediately obvious, but one must remember that the English were also limited to trading by sea, also had rocky relationships with their neighbors at times, and had a great love for wine, a commodity that they could only get through trade.

Because England is too northerly to reliably grow grapes for wine, the English have always relied heavily on imports to slake their thirsts. The general view was that French wines were the best and strongest, but their import was unreliable as the English and French were often going to war.

All these factors were in place just as a couple of Englishmen visited the mountain town of Lamego in the Douro valley in northern Portugal in 1678. It was there that they discovered a local abbot was fortifying his wines with brandy before fermentation had finished, leaving sugar in the wine.

This is what we now know as Port, and its discovery at this time in history was nothing short of magical for both the Portuguese and the English. 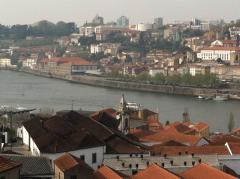 For one the addition of brandy made for a more stable product for the long sea voyage to England, and made the wines more robust which was always why they had fallen short of French wines in the past.

Also, the importance of the sweetness of Port cannot be overlooked, as sugar returning from the New World was making sweetness an immensely popular fad all over Europe.

So enter the perfect product, and add a new war with France and lower tariffs for Portuguese imports and you have the perfect environment for Port to take off.

Around the same time, Portugal’s maritime culture lead to the creation of a new unique and historically important wine. With the plenitude of resources available in the New World seemingly available for the taking, trade routes are established, but efficiency demands that a captain fills his boat with something to take to the New World before filling it with treasure for the return to Europe.

Enter Madeira, both the island and the wine named for it. The island provided a base camp of sorts from which to begin the trek across the Atlantic, and the wine provided ballast for ships, and product to sell to thirsty colonists.

Like Port, Madeira is fortified to prevent spoilage. Unlike Port, Madeira wine would spend a great part of its life gently cooking in the holds of boats traveling on or near the equator. This effect, now called “madeirazation” was unintentional, and unknown to the makers of Madeira, but was relished by its consumers, especially the founding fathers of the United States.

So how do we go from a country with two of the world’s most popular wines to the current state of affairs? There are several factors: changing tastes, modernization of transport, and changing political landscapes all contributed to making Port and Madeira both less popular and less relevant.

But perhaps the greatest factor was the same thing that did in Spanish viticulture for much of the twentieth century: fascism.

Although the Portuguese don’t like the constant comparison between themselves and the Spanish, here it’s relevant. In both countries, long-term fascist regimes kept winemakers from innovating and keeping up with modern technology and trends, and rewarded cooperatives making bulk uninteresting wines.

Both regimes ended in the 1970s, and both countries have spent much of the last few decades catching up with the rest of the world. Like Spain, Portugal winemaking has both embraced modern technology and tastes and refused to reject their local traditions and culture.

Connections to the Past Found Along the Way 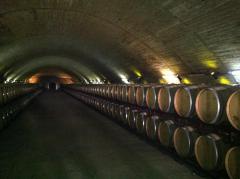 The way this looks in the region of Alentejo that I visited in the central-southern part of the country is shiny modern wineries in the middle of rustic ranch land. These are surrounded by ancient olive and cork trees and grazing sheep and black pigs.

It means that the polished modern wines made by wineries like Esporão, with big fruit, structure, and oak are made from local indigenous grapes like Trincadeira, Castelão, and Touriga Nacional (reds) or Arinto, Antão Vaz, Roupeiro, and Perrum (white), to name a few. 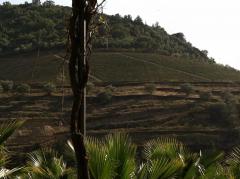 In the Douro, the famous valley of Port in northern Portugal, old school Port houses with English names are being joined by small single vineyard wineries in making unfortified modern dry wines. This is done with much of the same power as the Ports of old and from old vines planted on steep terraces climbing the sides of mountains.

In the Douro at Quinta dos Murças, I saw something emblematic of this marriage of old and new: a brand new beautiful stone lagare. I saw the big shallow tubs for treading grapes with human feet, complete with a stainless steel tri-clamp hose drain coming from the side. 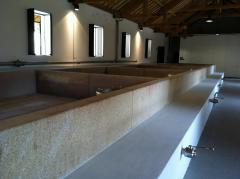 A modern, efficient installation, where the actual crushing itself is still performed using the same method used in ancient times.

Yet as much progress as Portugal has made in the last few decades ramping up their winemaking, they still have a long way to go, as the questions of my friends and family as I was preparing to leave show me.

The majority of American consumers still don’t know much about Portuguese wine. However, for those of us adventurous drinkers, this is good news.

If you like to try new things, you can get Portuguese wines of incredible quality for amazing values. Because the wines aren’t in high demand (yet), the prices are often low for the quality you’re getting.

So you can enjoy a big rich complex deeply-fruited red like the wines of the Douro or Alentejo, or a minerally, lightly perfumed white from the Minho, or a wine from Bairrada made from the Baga grape reminiscent of a darker fruited Nebbiolo.

Instead of being intimidated by all the unfamiliar grape varietals, the sensible thing to do is to dive right in and try some fantastically made wines from people who love their craft and sell it and a terrific price. After all, at some point, the hipsters and fad-makers may “discover” these wines and we’ll have to pay twice as much for them.

I’ll leave you with one last story that sums up nicely the spirit of the Portuguese winemaker. I heard this at the Alentejo winery Quinta do Mouro, a winery started in the 1980s by a dentist named Miguel Louro. His son Luís helps with the winemaking now and has his own winery, Adega Monte Branco nearby.

Luís told me this story about the first time wine critics came to taste his father’s wines.

They told Miguel that his wines were pretty good, but a little too rustic and too tannic; that they’d be better with a little more sweet chocolate and vanilla notes. Without missing a beat, the dentist told the critics that he was sorry, that they must have come to the wrong door, “this is a winery, the ice cream shop is next door.”